To be honest, the sex pact wasn’t always part of the plan.

Female teenagers decide that all of them are going to lose their virginity before graduation. Surely nothing can go wrong (and cringe worthy).

The thing is, it almost doesn’t. For once girls are shown as sexual beings as well, for once there’s focus and care about body positivism, self-development and orgasms. They’re allowed to be characters instead of clichés, and it’s easy to start caring for the group.

So what did go wrong? As usual, the b-word in between homosexuality and heterosexuality seems to be non-existent, and I hope not too many readers get their hopes up about the eagerness of teenage boys performing oral sex. Some chapters are saccharine sweet, but by then you have already been reeled in to support everyone.

It’s a good one for a glance behind the girl teen facade.

Lloyd shoves off the bedcovers and hurries to the front door in white underwear and black socks.

Oh boy, a novel involving journalists, editors and media. At least the title vouches for a neutral, not-myth-making point of view?

It definitely does. There (still) seems to be such a charm attached to the media making branch, while at the same time having entire populations look down on it. The Imperfectionists need neither, cocking up and showing human weaknesses all too often themselves.

The story is about the going-ons of an English-language newspaper in Rome. Editors, correspondents, even a loyal reader — all get a chance to share their point of view.  Over fifty years there’s not only the societal changes, but also ones in the branch that show that decades of years at the same company isn’t a good idea for many people.
It makes things (all too) recognisable, funny, sad, and the reader possibly left with a craving for a visit to Italy.

It’s a light, quick read that might make you think differently about media and journalists, but definitely will make you feel less like a stubborn fool. There’s this crowd, after all.

The old lady loved sex and had – for forty years – been looking for a way to enjoy it even more.

It’s clear to me that I’ve been reading so much more non-fiction: phrases I use start feeling repetitive. But yes, this book is a bit more on the novel side of writing, opposed to straight up history book. Mostly – I think – because the huge amount of personal lives added. How personal can you be before history turns into human interest? Or is there no line? Anyway, to The Birth of the Pill.

That pill, yes. The one that doesn’t need another name and never really got one. Margaret Sanger, Katherine McCormick, John Rock and Gregory Pincus are the people behind it. With different motivations (more independence for women, population control) it was work of years and years. Besides their stories, there’s the imagery of the USA in that time, society and (its lack of) women’s rights, and how health and medicine were viewed. It makes the book a large slice of life story, with enough facts to fill a pub quiz. One related to the sexual revolution.

The Birth of the Pill, Jonathan Eig, Carrera 2014

Another Netflix Marvel cooperation? Of course, as long as people watch it. 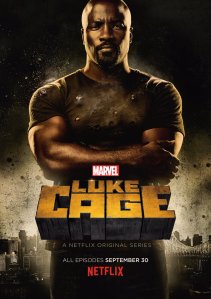 Was Jessica Jones special because we finally got a female character, this time Marvel goes off the beaten path with a black main character. Heck, the absolute majority of the cast is black, which must have had some people worried about sell-ability. Is the blackness (the surroundings, the cast, the subjects mentioned) the problem of the show? No, it isn’t.

Then what is? The length, and the main actor. As stoic, almost-invisible stubborn hero, Mike Colter is doing fine, but he is surrounded by too much talent to not escape comparison. As usual, the less focus on the main guy, the better.
This season is thirteen episodes, while it would have been tighter and more exciting if it would have ended after episode eight. Now we get a load of new villains that need to provide a cliffhanger that’s just too weak. This has been a problem with the other Marvel Netlix shows as well.

The ladies steal and save the show. Alfre Woodard, Rosario Dawson, Simone Missick and those in smaller parts show that a female part can be more than mother, Maria and whore. For once, I can say that you can pick a Marvel project for the women.

She gets into the car and then she can’t drive it.

As if being a teenager isn’t hard enough already, both main characters in All You Never Wanted get to deal with disease. Alex as the carrier, Thea as the younger sister who can’t handle the big changes it brought to their lives.

It’s never explicitly mentioned what happened to Alex. Is it anorexia, bulimia, something physical over mental? No matter what, it’s crippling. Alex can’t move, can’t breathe, can’t live. While Thea needs bigger and stranger stories to flee in, to be someone besides the sister of the sick, strange girl.

Each share their point of view, without any resolution or relief. The only way this story might leave you with some kind of good feeling is for the fact that you don’t have it as bad as them. It’s a slice of life to remind you that adolescence is more than love triangles and doubts about the future.

All You Never Wanted, Adele Griffin, Alfred A. Knopf 2012

In the fall of 2013, I was in my first semester of school in a decade.

It was definitely better than the second movie, but how hard was that one to beat? This time we’re back to the feeling of a summery, no-need-for-life-lessons Star Trek. And even 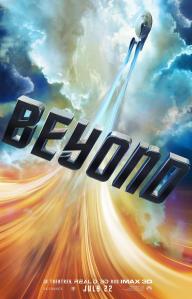 though the director came from the Fast and the Furious series, not that much races.

As usual, the Enterprise is off somewhere, trying to help out an alien race, when they find someone that needs their help somewhere else. Being good Federation crew, they follow. A villain needs to be added in somewhere, so guess in which ways things don’t go as they should.

This time the movie moves along much smoother, there is less lens flare and random female nudity and flat-falling jokes. It could still do with more speaking parts for women, and it’s sad that a same-sex kiss had to be cut out. But if it’s going to be a trilogy, we leave on a semi high note, else the only way is up.