I understand why this is quite award-friendly. I also understand why it didn’t win a lot. With these vague comments out of the way, let’s get to the story. 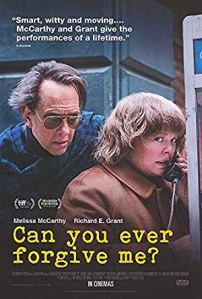 Lee Israel is an author that writes biographies not a lot of people – and definitely not her agent – care about. Instead of trying to find a job that will make her enough money to take care of her bills and sick cat, Israel digs in and tries to continue with making money from her writing. She’s complimented on completely disappearing behind the person’s voice she writes a biography about so that’s what she does: disappear. With her research and writing skills, she starts a very profitable business of embezzling letters from dead celebrities. With her lack of people skills and restraint … let’s just go with ‘it doesn’t end well for many people involved’.

The entire movie looks and feels a bit grubby, stubborn and unwilling to get out of the rut Lee Israel put it in. Israel herself isn’t a likeable character, but she isn’t exactly unlikable either. That’s probably largely due to neither Melissa McCarthy and the writing worrying about showing her ugliness. This is a sad creature, and her friend/fellow criminal isn’t much better off. Maybe you don’t completely root for them, but the ending will leave you tender.

Can You Ever Forgive Me? Fox Searchlight Pictures 2018

Even in Los Angeles, where is no shortage of remarkable hairdos, Harry Peak attracted attention.

You had me at libraries, you from time to time lost me about the focus on not just the Los Angeles Public Library (so okay, it’s one of the main plots), but especially the background of the possible culprit and fluffy descriptions of ever person involved in any way. I would rather have seen book covers, if Susan Orlean felt like she needed to add some visuals.

But still: there is so much love for books and libraries and librarians that you almost feel yourself slip into that world that is more than only centered on books. Libraries are miniature societies, and Orlean shows it well.

So, if you’re about books, architecture, and American history through librarians – this is the book of your dreams. If just any of these categories do it for you: consider it as a bit of an encyclopedia; read a few chapters from time to time. That way, you’ll always have some time left to visit your own library.

The waiters were singing “Happy Birthday” in Chinese.

One main disappointment about this story: not enough descriptions of food. In some ways, this one felt like an international version of De zoetzure smaak van dromen; also the (immigrant) family in and around a Chinese restaurant. Except this one has a lot more infighting and drama. And as I said before – less descriptions of food.

So, what does happen in this novel? No-one seems to be very happy with their place in society. All are connected to a Chinese restaurant, but some (feel like it’s) in the wrong way, and some want to cut all ties. There’s the son of the owner, employees that have been there for decades, and those at the fringes of their lives. A fire doesn’t make things easier, even though it was slightly expected to.

It’s not the most accessible of novels; there are very few people to like and sometimes side plot lines take a bit too much space. On the other hand: it’s mostly the male characters that are the annoying ones, and all of it shows humanity. With a title and subject like this, it could have easily become a collection of stereotypes about Asian Americans: instead you’re shown that family and finances issues work the same in every (sub)culture.

My story begins on a sweltering August night, in a place I will never set eyes upon.

Adoption isn’t an easy subject, but the historical story line of Before We Were Yours shows at the very least how it definitely shouldn’t be handled.

There are two story tellers in this novel about an “orphanage” that basically stole children from poor people and sold them to rich families. One is the girl and her siblings that go through it, the other connected to her through different generations. This element sometimes makes it a little bit Lifetime-ish, although her motivations for discovering more are at first more political than personal. ie the sob story starts later into the story.

Weaved in between these two is a romance that isn’t quite necessary, but not horribly done either. I feel like the subject is what elevates this novel from being just another one of the paperbacks your gran reads and pushes upon you because it’s “so exciting”. It’s an easy, accessible read, but the horror of the “orphanage” and the reality on which its based, is what gives the story its pull.

Before We Were Yours, Lisa Wingate, Penguin Random House LLC 2017 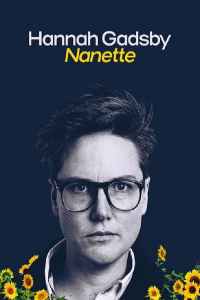 It was late in the spring when I noticed that a girl was following me, nearly the end of May, a month that means perhaps or might be.

Gods, I wish that this would be mandatory reading for male teenagers. Okay, any teenager. Why? Because it hits home with several hammers the fact of diet culture and how women are viewed in society. I know, but so many still don’t, and it’s best to get them as young as possible.

Is this is an activist story? Is showing reality activist? Protagonist Plum is fat, and have been working almost her entire year to not be it. She’s not living, she’s functioning until she can live as a skinny person, a normal person. Things are changed around when someone reaches out to her.

Simultaneously, violence acts against male rapists and abusers happens. People are confused, shocked, motivated, because whenever do men get what’s coming for them? Maybe a few trigger warnings are at place here: Sarai Walker doesn’t avoid descriptions of said acts.

The comedy tag is mostly for the laughing in disbelief you might do. Because yes, they’re right, and yes, it’s really this stupid. Or maybe you just have to laugh to prevent from getting angry for the entire time of reading it. You wouldn’t want to be considered unfuckable, after all.

Marsh is not swamp.

Subconsciously I picked out two books about protagonists who are –  by their surroundings – viewed as dangerously different. This one plays out in the (recent) past, but both Kya and Evan suffer from living in a small town.

Kya’s family is very, very poor, living in the marshes (or on the edge of it) and there’s not enough happiness around for anyone. Her family members leave her, and she falls back onto her familiar surroundings instead of the judgmental villagers.

This goes on for years, and might have gone on longer – Kya turning into something of a Tarzan, except with gulls and other birds – if a murder mystery wasn’t added to the equation. And what happens when disaster strikes? People look at the stranger.

This isn’t as greasy and damp as Midnight in the Garden of Good and Evil, but Owens does create a colourful, sometimes feverish world in which every human is a misfit – except for Kya. Yes, there could be more background about certain things, and the murder mystery is tied up not completely satisfying, but it’s a book with a feeling. And quite a few ornithology lessons.

I should have guessed something was up when I was walking home.

Somehow I expected a softer story: the title, the subject (teenager doesn’t dare to come out), the surroundings (a small American town). But the author doesn’t hold his punches, like the mother of the protagonist doesn’t. I know that’s considered a spoiler, but I feel like that subject should come with a warning.

Evan’s life isn’t an easy one. His mother views him as lazy and evil, and his father almost never steps in when she gets aggressive. He doesn’t dare to come out to anyone, and all his energy goes to keeping all his different worlds (home, church, school, friends) apart.

Things change when his good friend starts to change, and when someone from Bible-camp shows up. Collision happens, and Evan can’t stop it.

The language used is clean and honest. Sometimes the tone feels a little bit too much like that from an after school program, but one has to remember that first of all these are a teenager’s feelings, and second of all, this is all too often someone’s reality. Besides that, you just want better. And possibly push his mother into the Grand Canyon.

The dangerous art of blending in, Angelo Surmelis, HarperCollins 2018