When you realise that you already watched this story, just not animated, five minutes before the end of the film. 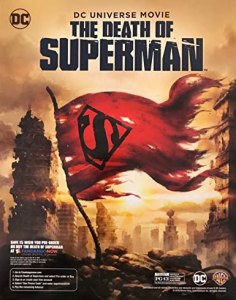 I like the animated stuff DC Comics provides. Their style (usually) works, the voice acting works and because I’m not familiar with the majority of the stories, I can’t get frustrated over a film or series “getting it wrong”.

So, yes, this isn’t just a comic but large parts of the plot were used for one of the recent DCEU films as well (Superman? Superman 2?). Yet that one didn’t make enough impact on me to remember the name of, so just stick around for the animation and better dialogue.

I think the thing about DC animation is what gets me is that it reminds me of the excitement you felt as a child: when animation styles were still appealing and the plots exciting. It gives me that Wednesday-afternoon feeling, opposed to the dumbed down stuff that’s around now way too often.

Yes, the comic did it first. But moving pictures and hearing voices add a lot.

Oh, and what it’s about? Superheroes, and villains. Duh.

I'm a copy writer, a journalist and a teacher, and my life evolves around reading, creating and writing. I watch a lot and read a lot, and sometimes I review it as well. View all posts by vnfrd