Very American, but short and charming enough to ignore that most of the time. Jules is the dollface who realises when her relationship ends (without her agreement) that she’s been neglecting all of her female friends. Her way back to them is a large part of the show. The rest of it is about life as a twenty-something, finding your way, feminism, sexuality, goals — a friendlier and less brazen Sex and the City.

What was cute in the first season – Jules has a fairy godmother in the shape of a snarky cat lady (literally a woman with a cat head), sees visions of all the ways in which she is a bad female friend – sometimes goes on for too long in the second season. In the second season her friends get a bit more room for development, and it definitely shows that Jules ..doesn’t have much of that.

Maybe the third season, which I’m sure will happen because Americans can just never leave a (good) thing alone.

Minding the Gap is a 93 minute documentary

Betty is a two season TV-show, 12 episodes of 30 minutes

And both of them involve skating, why I combined the two. Minding the Gap is a sober documentary about life in a small town with an even smaller amount of possibilities to get out of the rut your ancestors created for you. The documentary maker returns after a time and goes looking for all his (skater) friends. Not all of them got out – mentally and physically.

This might all sound terribly depressing and it’s definitely not a fun, cool watch, but director Bing Liu manages to make you feel for these strangers like it’s your own set of friends.

Betty keeps things (most of the time) a lot more lighthearted. It’s based in reality with the skateboarders having been plucked from the street and allowed input to stories (according to the credits), but HBO puts a very cool, glamorous, quick-living sheen over it. It’s a group of diverse female teens in New York that skate. There are a few (teen-related) problems, but mostly it’s just cruising: little goes permanently wrong.

That also turns it into brightly coloured wallpaper pretty quickly. Or maybe I’m just too old and not cool enough.

Either way, I still want to get a skateboard and try my hardest to master it now.

I’ve talked before about how I like (some parts of) French cinema, but I’ve got little experience with French television. But I’ve yet to find something Omar Sy does that I don’t care about so yes, sure – I’ll watch a show based on a French gentleman thief.

The series aren’t about Arsène Lupin (the gentleman thief), they’re about Assane Diop who uses his stories as inspiration and motivation to set a wrong from the past right. But as we’re in the twenty-first century now, things go a little bit differently.

And Lupin didn’t have an ex and a child – as far as I know, or the series tell us.

It also made me want to visit all kind of spots all over France; not something that’s usually on my mind. A third part is already in the making and even though Diop can’t take on the entirety of French corruption, I’ll watch him try for at least two more parts.

Crazy Ex Girlfriend; or how shows sometimes really need to put up a disclaimer with regards to both title and summary: no it’s not what it looks like and maybe take things literally for once.

Because it’s probably widely viewed as crazy to move to the other side of the country for someone you dated a couple of weeks when the both of you were teenagers. And it might not be up everyone’s alley to turn this element into something that needs musical numbers. A lot of them. About all kind of subjects.

So, I forwarded the few musical numbers, and maybe some of the scenes in which Rebecca was just too much. Awkward, honest, scared, sad – all of them.
But then. Then you may slowly but surely catch up to what’s going on. Recognise that the comedy part of this dramady may be more sour than saccharine and the drama part too hard-hitting to be comfortable. And yet: the balance stays.

Laughing, hurting, crying, cringing: suddenly Crazy Ex Girlfriend turns out to be an intelligent show on mental health and society’s ideas about romance and relationships. With smart, hilarious lyrics when they do add a musical number.

Yes, I was very surprised as well. Now – after having completed it three weeks ago – I miss the show.

Unlike the protagonist of my previous review, Sofie and Max have clear reasons to be maladjusted, rude weirdos. Most of the time. They also get much less flack from me for this because they’re funny and pretty attractive. Just being honest here.

Sofie is a married mother who’s brought in as a consultant at a publisher. Max is the IT-guy. They give each other weird assignments. The assignments escalate. So do feelings. So do their lives.
And it all plays out in Stockholm, so the escalations are all with subtitles.

This is romance, slice-of-life, coming-of-age without any Life Lesson beating you over the head of soundtrack telling you what to think. It’s quick (eight episodes), funny, sad and fresh.

Anarchy might be a big word, but it’s something different; in a good way.

It’s no secret that I enjoy family epics, be they written or on screen. It’s a way in which writers (and actors) can show how much they now about character-creation, and if done well, can shove plot and world-building to the background. In the case of Queen Sugar, that isn’t done exactly – the cinematography of this show alone is making it worthwhile to watch. 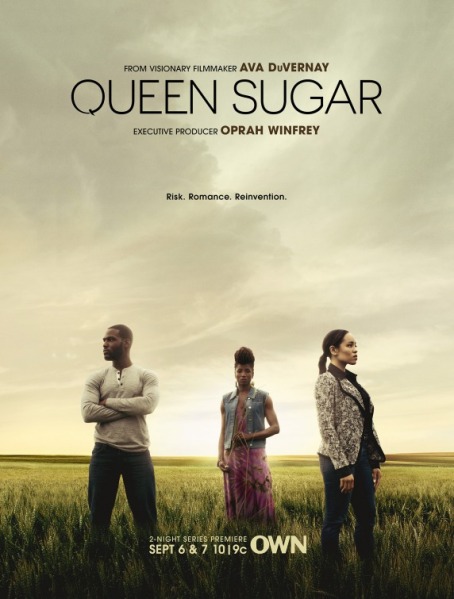 In the beginning everything is clear. Three siblings come together because of a family emergency and disagree with each other on everything. Something happens, and they’re stuck together longer than desired. It’s the acting of everyone involved – down to the young boy – that makes you actively root for them to find each other again, and get what they desire.

Queen Sugar plays out in and around Louisiana, shown in such luscious colours that the few times in and around Los Angeles feel flat and fake. It’s clear that this state is another world, and some siblings fit in better than others.

It’s of little importance if they siblings learn that they work best when together and if they get what they want in the end (although I’ve learned that there’s four seasons, so who knows what will still happen?). Solely the looking and listening might be enough for you to enough this first season – which does fine on its own.

Yes, I know, I’m surprised as well. This animated TV-show definitely took me a while to warm up to, and during the first two season (there’s five of them) I wouldn’t even have considered writing a blog about it. Somewhere near the end of season two, and/or the start of season three, it grabbed me. It grabbed me good.

Before starting this show, I knew little about the previous incarnations of it and therefore didn’t feel the need to complain about how She-Ra isn’t a full-grown woman this time, nor about the lack of butt and boob shots (in an animated show, yes I know). It also means that I didn’t have any connection to it, and had to invest some time and energy to feel the connection.

She-Ra is fantasy, people with magic, bad guys that want to take it, colourful stuff, talking horses, but also teenagers, queer love, building your own family and views on power and the (ab)use of it. Especially when watching several episodes in a row you might notice some repetition, but as someone who skipped a few (there’s a character I could barely handle) I can say that you can still follow the main plot without confusion.

It’s also fun and bright and there’s so much heart in it, even though the shows of it sometimes made me feel a bit outside of the target audience/too old. Oh, and the animation is nice, instead of that try-hard, ugly as possible “adult” animation we have to suffer all too often.

She-Ra and the Princesses of Power, Netflix 2018

In the case of some shows you feel bad about not experiencing at the same time others did it. With some, the experience is just enhanced by going “Ooooh sh-!” to someone else.

And there’s plenty of moments like that in this TV-show about a woman who just keeps dying and doesn’t know why and can’t get out of this Groundhog day-situation. It being a woman played and written by Natasha Lyonne (you might remember her from Orange is the New Black) this groundhog is more like Final Destination when it comes to dying creatively.

With less than thirty minutes of runtime and eight episodes there’s not enough room for this element to get old: there’s just enough glimmers of clues to feel like you’re onto something just a bit before Nadia does.

The one con is that there’s going to be a second season: this could have been resolved, even in a possibly unsatisfying way in the last two episodes – easily. Now there’s the risk of things becoming stale.

Although Nadia’s back-to-life soundtrack might just be good enough to prevent that.

This had me feeling awfully tender; not solely because I recognise everything the main characters experience, but mostly because the camera never turns away. You never get a break from emotions, fights and awkwardness.

For a show that’s easy to summarise, it’s not easy to review. I liked it, a lot. The story of a young woman struggling with gender identity and addiction, romance and family and being a comedian in the way that Hannah Gadsby is one – way too honest. Protagonist and creator Mae Martin added (some) biographical elements to the show as well, which might another layer of discomfort.

It’s the lack of heaviness that just makes it all more genuine and heartfelt. No musical clues about how to feel, not a lot of explanatory dialogue, just Mae and her girlfriend stumbling through life while you try to get them into a different direction.

Still, it’s sweet, and funny. There’s not fanfare or shoulder-pats about showing and discussing Big Subjects – they just happen to be the elephants in the room that have to be discussed.

Maybe not for everybody, but definitely for those that are always interested in the human connection.