Marvel works hard to take over every traditional medium. There’s a stark difference between their Netflix and regular cable work. Daredevil was alright, Jessica Jones was quite alright. Agents of S.H.I.E.L.D was so bad that it put me off trying the other main cable show Agent Carter for little less than a year. 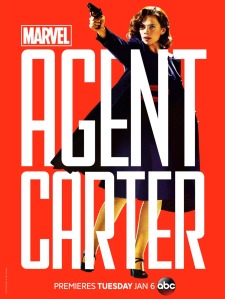 Agent Carter is Peggy Carter, Captain America’s love interest in his first movie. This means the show is set close after the Second World War, and the times’ sexism is a large part of the villains offered. For the rest there’s the plot: Howard Stark needs his name cleared, a load of (nameless) bad guys are stealing his stuff and Stark’s butler – Jarvis – helps Carter out and offers comic relief.

It’s breezy, silly fun, but the biggest difference with those other agents is that nothing feels like cardboard. The actors try, the actors have fun. And with (just) eight episodes, it’s easy to join in.