Hallelujah, another romcom. With some coming-of-age elements. And fish-out-of-water, because this romantic comedy largely involves an immigrant family in the USA. Which means there’s people of colour involved as well, score! I know this could be read as sarcastic, but I feel like romantic stories are even more often super white than other 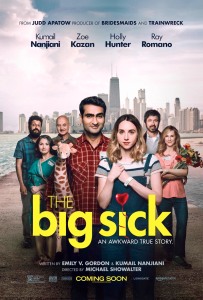 Kumail and Emily meet when he’s doing a standup show, both decide that this meet up is going to be an one time thing.  Good thing we know there’s way too much chemistry between the two of them to believe that.

Romantic gestures, fights, breaks ups and make ups are (mostly) thrown aside for a much bigger game changer: Emily becomes seriously ill. How does a relationship work with/around that?

Kumail goes through some Life Lessons, while Emily is (more) fleshed out through the presence of her parents. It’s their chemistry that doesn’t make you ask too much questions, just look at the darn cute of them. The other characters are everything you need in a romantic comedy.