Definitely more fun when you watch it without knowing too much of the Star Wars universe and stories. And don’t act like it’s an international embarrassment if you aren’t 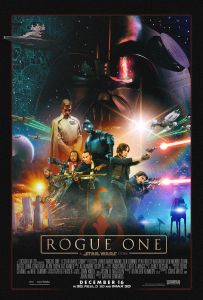 well-versed in its material.

Anyway, there’s another female brunette who needs to fight the baddies. She doesn’t want to at first, but Things Change and she realises that the Rebellion needs to succeed. After a dark (literally and figuratively) first half, it’s for the viewer clear as well.

In my mind Star Wars movies have always been different shades of sand colours, so the beautiful shots of the beachy planet definitely left me pleasantly surprised. So did the tempo, never giving you the feeling that there’s filler or that you’re stuck in your chair for another [x amount] of minutes. And yes, it is watchable with nary a clue about its background.

Think Indiana Jones in space, think explosions, narrow escapes and aliens and you have an entertaining two hours at the ready.